Leadership through Learning…All Day, Every Day!

Congratulations to our Cougar track and tennis athletes, who've wrapped up their seasons of spring sports! And a special tip of the hat to two Dell City ninth-graders – Iris Ayala and Reyes Espinoza – who qualified for the area track meet in Buena Vista, and did great in that event Wednesday (April 14).

Reyes, too, took his performance to another level at Buena Vista – shaving five seconds off his time in the 800-meter run, and clocking an impressive time of 2:36 in the event.

It was a long day for Iris and Reyes, and for our coaches, Joe and Trever Czubinski, who left Dell City for Buena Vista at 4:30 a.m., and returned just before 10 p.m.

The coaches praised the hard work of the two young athletes.

“They did really well,” Coach T said, “and they're both freshmen – they have three years to develop.”

Reyes and Iris had qualified for Buena Vista through their strong showing at the district track meet, held last Friday (April 9) in Van Horn for both high-school and junior-high competitors. Iris took second in the 100-meter hurdles there, and third in the 300-meter hurdles, as well as sixth in the long jump. Reyes took fifth in the 800-meter run, sixth in the 400-meter, sixth in the triple jump and eighth in the long jump. Fellow ninth-grader Luis Ayala also competed well in Van Horn – taking ninth in the shot put and 11th in the 100-meter run.

Our Cougar double tennis players – junior Esteban Morales and ninth-grader Luis Guillen – wrapped up their season with good play at the district meet in Fort Davis Monday (April 12), and they'll be back to develop their team play next season.

With spring sports over – Cougar coaches and athletes have turned their eyes to the fall, and six-man football. Dell City will field a varsity football team next year, for the first time in three years, and Coach Ski and Coach T started conditioning work with the students today.

Great work, Cougars – and we'll see everyone at Cougar Field, next fall! 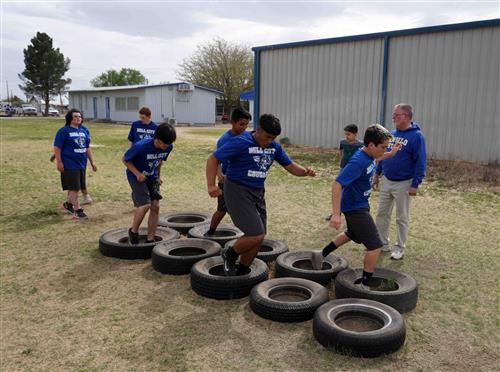 Copyright © Dell City Independent School District 2018 — Dell City ISD does not discriminate against any employee or applicant for employment because of race, color, religion, gender, national origin, age, disability, military status, genetic information, or on any other basis prohibited by law. Employment decisions will be made on the basis of each applicant's job qualifications, experience, and abilities. Inquiries concerning the application of Title VI, IX, the Age Discrimination Act of 1975, and Section 504 may be referred to the Human Resources Manager, P.O. Box 37 / 110 N. Main Dell City, TX 79837. Dell City ISD is an Equal Opportunity Employer.
Copyright © 2002-2021 Blackboard, Inc. All rights reserved.